The “vibrancy of Galway” was always going to make it an extremely attractive location for remote workers, according to Galway Chamber. The Chamber was speaking after the National Remote Working Survey from the Western Development Commission and NUI Galway found that Galway was the most popular county for remote workers who had relocated.

The research also found that nearly two thirds who have relocated have left Dublin. While 76% are under the age of 40 and 48% of them have a masters or doctoral qualification

Speaking in reaction to the research, Kenny Deery, CEO of Galway Chamber said, “It is positive to see Galway named as the most popular destination in Ireland for people who have relocated. The vibrancy of Galway has always struck a chord across the country and that is what makes it such a desirable location. Galway sees that continually reflected through domestic tourism and with the pandemic having sped up the acceptance of remote working we are now seeing it in the professional and familial choices being made by a significant portion of those who have relocated.

“This probably won’t come as a massive surprise to anyone who is living in Galway as you can see this on the ground. We can see it amongst our members. Increasingly there are signs of this stream of remote workers who are moving west and who want to live their lives in Galway, to experience all we have to offer here. There is such a wonderful cultural, sporting, educational and business mix in Galway and that has always been a massive part of our appeal.

“When this is coupled with the fantastic supported spaces we have to facilitate remote workers, especially Galway Technology Centre and Portershed, it really does simplify the decision and make it easier for anyone who is looking for a new location in which to put down roots. These are factors that the Chamber sought to highlight through our Why Galway campaign and we fully expect that these same elements will continue to draw more remote workers to Galway for quite some time to come,” Mr. Deery concluded. 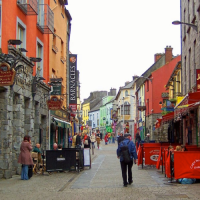