A decision by An Bord Pleanála on the proposed Galway City Ring Road has been deferred again until October.

The 18-kilometre route would run from west of Bearna to the existing M6 motorway.

The N6 GCRR comprises 5.6km of single carriageway from two kilometres outside Bearna Village to the Ballymoneen Road and 11.9km of dual carriageway going east where it merges with the N6 at Coolagh, Briarhill.

The controversial €600m project, which impacts approximately 500 landowners, 44 houses and 11 businesses, has been deferred a number of times.

He said this was the biggest piece of enabling infrastructure to allow Galway and the wider western region to grow.

"It will bring a ring around the city that will decongest the city centre and allow traffic that doesn't want to be at our roundabouts and junctions not be there," he said

"It will give Galway the capacity to be a sustainable urban centre in the future and save hugely on journey times. It would be great to get a positive response on 1 October but I sincerely hope that we don't go into a further deferral cycle," he added.

The ring road project has faced opposition from a number of groups who are calling for enhanced public transport options.

They say Ireland's obligations to reduce carbon emissions would be compromised by additional road infrastructure of this kind.

Galway County Council estimate the road would take about three years to construct and would involve a number of tunnels, as well as a viaduct over the River Corrib, on lands north of NUI Galway. 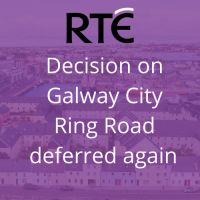