Almost 150,000 people are employed by multinationals in Ireland’s regions, accounting for more than half of all multinational employment.

“That’s a clear endorsement from decision-makers that places such as Cork, Galway, Limerick and Waterford can deliver,” says Barrie O’Connell, a partner in KPMG, who is based in Cork.

“The appeal of the regions is essentially a mixture of factors, including the availability of talent combined with quality of life and the fact that our improved infrastructure – both transport and digital – makes places more accessible.”

The development of technology hubs, such as the Ludgate Hub in Skibbereen or Portershed in Galway, is helping too, offering the potential to transform the regional economy outside of larger urban centres. “In the context of changing work patterns and continually developing regional growth strategies, such hubs have an important role to play,” he points out.

US multinational companies (MNCs) are playing a major role in driving innovation – as well as employment – across Ireland’s regions. For example, “Eight of the world’s top 10 medtech companies are based in Galway and the medical devices designed and made here are saving lives all over the world,” says Austin Sammon, a partner at professional services firm Mazars who is based in the City of Tribes.

While Ireland is well known for its 12.5 per cent corporate tax rate, it is also known for its talent and track record, he points out.

“Effective internationalisation should focus on factors other than tax, and access to talent is a priority for several MNCs in the region. Galway has a highly educated talent pool and ranks second-highest in Ireland for its population proportion. Almost half the population of Galway city and county (45.3 per cent) have received third-level education,” he says.

“NUIG and GMIT provide Galway with a highly educated and innovative workforce, and this has placed the region at the forefront of innovation and productivity. As a result, more people are working in higher-value jobs and open to using new technologies and innovation.”

These institutions also work closely with industry and help MNCs overcome talent shortages. For example, NUIG and IT Sligo have established a programme to meet the growing requirements of medical technology companies in filling regulatory and quality assurance roles.

In recent years they have developed an MSc in Medical Technologies Regulatory Affairs in conjunction with selected external professionals.

“Accessing a talented people pool, together with generous incentives such as R&D tax credits, will ensure Ireland is at the forefront of locations for US MNCs to consider, and we must ensure Galway is equipped to attract these companies to the west,” he says.

That Galway is an excellent place from which to do business and enjoy a high quality of life is being highlighted in a new campaign, Why Galway, recently launched by Galway Chamber.

“The campaign aims to attract 40 FDI companies to Galway, which is crucial as we emerge from the pandemic. The campaign highlights the thriving enterprise ecosystem in Galway and the benefit of investing, working, living and studying in the west of Ireland and will target audiences in the US,” he explains.

The southeast region is benefiting too. It is home to 74 multinational companies and has a robust track record in terms of attracting and retaining FDI. Over the past five years employment among IDA client companies there increased by 24 per cent.

The main clusters in the region include high-value manufacturing, life sciences, technology, engineering and industrial technologies, as well as international financial services.

The strong focus in recent years the IDA has put on establishing the region’s tech cluster is reaping benefits. UPMC – a leading integrated healthcare provider and insurer – established a Global Technology Operations Centre in Kilkenny in 2020, to support its continuing international expansion.

According to the IDA, Ireland was chosen for this investment as it has a strong talent pool, a business-friendly environment, a significant presence of major tech companies and an active and supportive innovation community. UPMC is among several IDA-supported companies currently hiring in the region.

Waterford’s tech base has matured in recent years and includes a number of significant global players. Red Hat’s operations centre has grown from strength to strength since it acquired FeedHenry. The global operation has in turn been acquired by IBM.

In recent years Routematch established its R&D facility in Waterford and has since been acquired by Uber, while SE2 also chose Waterford as its base for its operations facility, providing agile software development to insurance clients in the US.

In Carlow, Unum has built a deep knowledge pool since it established its strategic software development and service centre more than 10 years ago, supporting many of its core business applications, including claims management and other critical systems.

In neighbouring Wexford, GrandPad, a tablet that helps older people keep in touch with loved ones, chose the market town of Gorey as the location of its EU HQ, while the county’s capital, Wexford Town, remains home to MTech Mobility’s European operations centre. 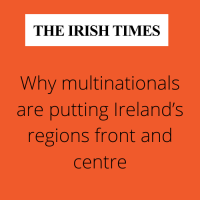