Plans have been unveiled for a significant redevelopment of the inner lands of Galway Harbour, with around 27 hectares of land to be reclaimed from the sea to extend the port itself.

A vision for the regeneration of dockland area of Galway city, involving the creation of a new “urban quarter” adjacent to the city centre, was set out on Wednesday by the Galway Harbour Company.

The redevelopment of inner harbour lands would open up “extensive” waterfront recreation areas and multi-purpose public spaces in the city centre, the company said in its proposals. Public realm spaces would make up around 30 per cent of the site area, with new bike routes and public parks to connect the harbour with its surroundings.

The plans are contingent on approval for the relocation and extension of the port, using around 27 hectares of land reclaimed from the sea. This would free up the entirety of the inner harbour lands for redevelopment, the company said. The new deepwater dock facilities would provide for better connections with Europe and beyond while the development would facilitate the installation of offshore wind energy off the West Coast.

The port, dating back to 1832, was downgraded under the 2013 National Ports Strategy from a national port to one of “regional significance”.

“In my view this creates a great opportunity in terms of housing, commercial needs and in terms of the docklands itself,” he said.

Mr Hoare said he believes the plans would have a “positive knock-on effect” for the city’s existing businesses by making the area an attractive destination.

Green councillor Niall Murphy said the project has “real potential”, although he is keen to see how the coastal development would be future-proofed against anticipated rising sea levels. As a development on public lands, Mr Murphy said he is hopeful the residential units would be affordable for families.

“The docks are fairly industrial at the moment and to change that would be a good thing… If it lives up to the vision, it would have very impressive recreational amenities,” he added.

The Government’s Project Ireland 2040 envisions Galway City will increase its population and jobs by 50 to 60 per cent over the next 20 years.

The project is at an advanced stage of planning, according to the Galway Harbour Company. Subject to approval, it is envisaged the harbour extension would be complete by 2032, with the inner dock development finished a year earlier. A six-week public consultation is now underway, with the company to engage with local businesses and other stakeholders later this week. 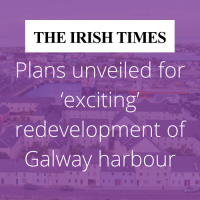