History in the Making for the Galway Chamber Council Election Process

History has been made in this years’ election process at Galway Chamber. Nominations have been received for election to 18 positions on the Chamber Council, 32 individuals have been nominated and for the first time ever over 50% are female.

Galway Chamber support diversity in its very broadest sense and, while gender has been a starting point, the Chamber fully realise that considerations of ethnicity, disability, sexual orientation, socioeconomic background and beyond are all part of the journey (and that gender identities are themselves evolving rapidly).

Galway Chamber believe that those organisations that foster truly inclusive cultures can reach their full potential to positively impact their people, their markets and their communities.

In addition to the increase of females running for the Chamber Council, there has also been a significant increase in the number of those running for election in its entirety.

Kenny Deery, CEO of Galway Chamber commented, “This year, we have seen a significant increase in nominations from business leaders across Galway to join the Chamber Council, more than ever recorded. It is heartening to see so many members of the business community stepping up to play part in Galway’s future.”

The election of the Chamber Council 2021/22 will take place at the 230th Galway Chamber AGM on Tuesday 15th June at 5pm.

Completed Postal Ballot Papers are to be returned to Chamber Office by deadline of 10am on Monday 14th June. 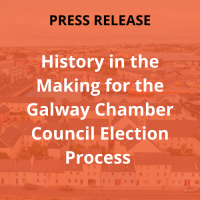