Galway Bay fm newsroom – €63 million has been allocated to Galway projects through the Government’s Urban Regeneration and Development Fund.

€40 million has been announced for a series of transport initiatives which will include the redevelopment of Ceannt Station and surrounding lands as a transport hub.

A further €12m has been allocated to Oranmore Train Station for significant upgrade works.

Meanwhile, €11m will support the long awaited Clifden Railway Pedestrian and Cycle Bridge across the River Corrib, which is expected to form an integral part of the city’s cycle network.

A total of €8.6 million will also be provided for the enhancement of a number of public spaces, including Eyre Square and Spanish Parade.

Meanwhile, €4.3 million will go towards the development of a new innovation and creativity district at Nuns Island, in cooperation with NUI Galway. 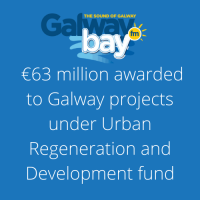