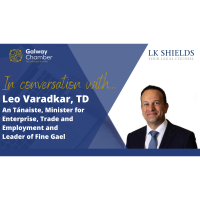 Galway Chamber in Conversation with... Leo Varadkar, An Tánaiste, Minister for Enterprise, Trade and Employment and Leader of Fine Gael

Galway Chamber is delighted to announce our next Guest in our Live Leader Series - An Tánaiste, Minister for Enterprise, Trade and Employment and Leader of Fine Gael, Leo Varadkar, TD.

This virtual event is kindly sponsored by LK Shields, and is open only to members of Galway Chamber.

An Tánaiste, Minister for Enterprise, Trade and Employment and Leader of Fine Gael, Leo Varadkar, TD:
Leo Varadkar TD is the Tánaiste and Minister for Enterprise, Trade and Employment having been appointed on June 27th, 2020. He was appointed the Leader of Fine Gael having been elected to the position by the Party?s Electoral College system in 2017.  He was the youngest ever Taoiseach from June 14th, 2017 to June 27th, 2020. He previously served as Minister for Social Protection from May 6th, 2016 to June 14th, 2017, and Minister for Health from July 11th, 2014 to May 6th, 2016.  He served as Minister for Transport, Tourism & Sport from March 9th, 2011 to July 11th, 2014.  Leo was first elected to Dáil Eireann in 2007 and is a TD for Dublin West.

As Minister for Transport, Tourism & Sport he led a number of bold initiatives, including The Gathering: the largest and most successful tourism initiative ever held in Ireland. He took the decision to link up Dublin?s heavy and light rail commuter network through the Luas Cross City project; open up more bus routes to competition; further develop the National Sport Campus; and grant independence for Shannon Airport. He also developed a new Road Safety Strategy and a National Ports Policy.

Galway Chamber in Conversation with.....
Register